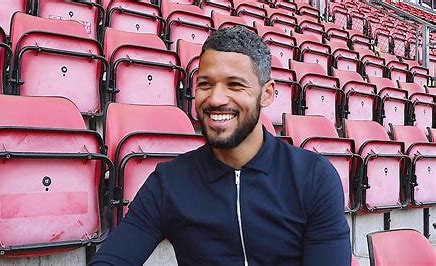 JE3 Foundation trustee Jobi McAnuff has been nominated to join the Football Associations board.

Today, the Justin Edinburgh 3 Foundation is delighted to confirm that trustee Jobi McAnuff has been nominated as an Independent Non-Executive Director of the FA (Football Association).

Jobi was a unanimous choice of the nominations committee and are subject to ratification by the FA Council in May.

Jobi’s appointment reflects the Board’s plan to reform its governance and a desire to have a more diverse skillset, including experience of playing English football at all levels.

His appointment also reflects the FA’s commitment to evolve to a majority independent Board, aligned with the recommendations in the Fan-Led Review.

As a former player and manager, McAnuff will bring his significant experience of the game to the Board having played and worked within English football from grassroots through to the highest levels of the professional game, as well as representing the Jamaican national team.

Jobi had an illustrious playing career, spanning over 20 years and making over 750 appearances for eight clubs including Crystal Palace, Reading, West Ham United and Wimbledon. He has played in the Premier League, all three tiers of the EFL, the National League, and captained Reading and Leyton Orient to promotions. Jobi also made 32 international appearances for the Jamaica national team and was appointed as Leyton Orient’s interim manager during the 2020-21 season. He is currently a regular analyst for Sky Sports, BT Sport and the BBC.

At the 2021-22 EFL Awards, Jobi was presented with the prestigious Sir Tom Finney Award, which is awarded to players who’ve had an outstanding career and contributed an exceptional amount to the EFL and wider football.

Jobi has also been nominated alongside Mark Esiri, co-founder and current chair of Venrex Investment Management.

FA Chair, Debbie Hewitt MBE, said: “We’re delighted to nominate Jobi and Mark to join the FA Board. Both appointments will reflect an important step in our commitment to add to the skillset, diversity, and independence of our Board. Jobi’s experience of playing in the professional and national game, as well as his coaching and management expertise and his involvement in grassroots and academy football, will enhance the Board’s insight to modern day issues on and off the pitch.

“Mark’s experience of creating and developing a broad range of digitally focused organisations, as well as his experience of stakeholder boards and grassroots football, will bring a breadth of skills to the FA.

“They are both passionate about using the game to drive positive change, which is strongly aligned to our mission at the FA, and we believe they will complement our Board well.

Jobi McAnuff said: “I’m delighted to be nominated to be part of the FA Board. This is an exciting time to join the organisation, under the stewardship of new FA Chair Debbie Hewitt. Having played and worked across various levels of the game, I believe that I can bring a fresh perspective to the Board. I want to use this experience to help move the organisation forward as it looks to tackle key issues and I can’t wait to get started.”

Mark Esiri added: “I have grown up surrounded by football, so to be able to play an important role in the growth and development of the English game is a huge honour. The FA is passionate about improving participation levels across the game through improved digital technology, which aligns well with my values and skillset. I am so pleased to be joining the FA Board and hope that my experience can help build on the positive work already taking place across the country and the wider game.”

Subject to ratification by the FA Council of the appointments of Jobi McAnuff, Mark Esiri and Tim Score, the FA Board would comprise:-

Congratulations Jobi on this fantastic achievement from everyone at the foundation.